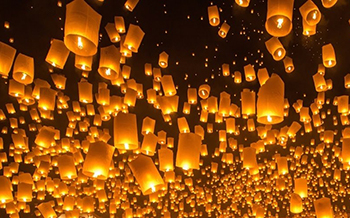 The Mid-Autumn Festival, also known as the Moon Festival (cn. 中秋節), is a national holiday in Taiwan with the most romantic atmosphere. The holiday takes place during the autumn, when harvest season is over, people thank the gods for the bounty of the year. This became a time for families to get together. The festival is celebrated on the 15th day of the August in the Chinese lunar calendar, the day when the moon is at its fullest and brightest. The most familiar myth concerning this festival is that of Chang-er flying into the moon after secretly drinking her husband's elixir of life. The Mid-Autumn festival has also used as occasion to celebrate marriages. Girls would pray to Chang-er to help grant their romantic wishes.

Since most of the activities held during this particular holiday are related to the moon, it has come to be known as “Moon festival.” Important traditions at this time include the eating of moon cakes, which symbolizes unity and closing of families; walking under the full moon; and eating pomelos. The Chinese term for pomelo sounds like "care and protection." Barbecues on this holiday has become the current trend, with families and friends getting together and enjoying a barbecue meal in the garden while looking over the moon. Another notable part of celebrating the holiday is the children carrying lanterns and thousands of sky lanterns are released into the sky for good luck.